This is the first AI Artifact, a magic item generated by an AI based on randomly generated words. In this case, those words are “knowledgeable”, “material”, and “bewildered”. If you want to know what this is about, you can find the rules here.

Update: I wrote about how I would make the artifact below in real life. I won’t, but I am sure the ideas in there can help you with your own ideas and projects. Check out Making AI Reality #1!

This is what I entered into the image-creating AI Midjourney in order to generate these pictures:

And here is what Midjourney came up with:

And this is the design I wanted to go with. I was going for bottom left first, but then realized that there were too many details there that do not really serve a purpose or tell a story. In contrast, I like the little vial on top of this one, and to me, it looks like some kind of trigger depending on how full the vial is.

So, the question becomes, what is knowledgeable, material and bewildered? Glad you asked.

The Telling Box of Backwater Hamlet

Most magic items with the ability to tell the future are locked away in some wizard’s tower. A few find themselves in the possession of a school for the arcane arts. But one sits out in the open at the village green of Backwater Hamlet, named thusly by cartographers because the locals could not be bothered.

It rests on a pillar that is in itself magical. Whenever someone approaches the box with the right kind of offering, it conforms to waist-high for that person. This allows them to place the offering – rainwater in a vial – on top of the box. The weight of the vial will push the top in slightly, but only when it is rainwater collected from the supplicant’s roof. Dew works as well.

Listening to the Box

With the offering made, the box will consume the water and rest for a moment. During that moment, the materials behind the window on the side – chips of stones and slivers of wood, submerged in a liquid with no other side to the container in sight – begin to stirr and glow.

Then, a sneering, metallic voice emanates from a mechanism on the box’s side. It will give a bewildering statement, repeat it three times, and then eject the vial and return to an inactive state. The consensus is that this is a personal prophecy, if only you can decipher it.

The reason that the Telling Box still resides in Backwater Hamlet is that it loses its arcane abilities as soon as it is removed from its resting place on the village green, no matter whether the pillar is moved as well or not. Additionally, if the pillar or the pillar are taken, they will magically return to its place underneath the Box within a week.

The artifact has been a boon to the Hamlet, but not for the obvious reason of knowing the future. There are prescious few cases of supplicant deducing their future correctly. Instead, the Hamlet is thriving because it gets to cater to countless fortune seekers and scientifically minded wizards alike. A large number of taverns has popped up to keep everyone entertained and fed while they visit the Telling Box. They even host friendly competitions related to interpreting the box’s predictions.

Do you feel more knowledgable already?

Since this is the first AI Artifact I have conjured up and described, I would like to ask you for feedback even more than usual. I enjoyed this, but I am aware that there will probably be things that I could have done better – a lot better! Help me out by joining my Discord server and give me feedback on this (and all other) post(s)! 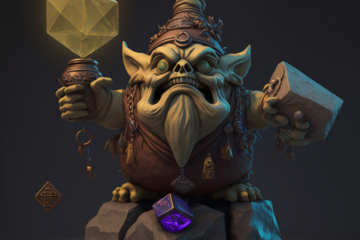 This is the second AI Artifact, a magic item generated by an AI based on randomly generated words. In this case, those words are “hateful”, “changeable”, and “giddy”. If you want to know what this Read more…

Here’s an idea, which may or may not be new. Use a random word generator, feed that into an AI as describing an artifact or rather a magic item, and write something about the resulting Read more…